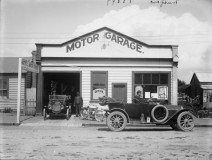 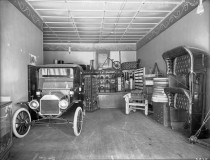 Note the early use of the "Ford" script in an oval around the walls! I did not know until recently that it actually preceded the '28 model A.

Just to add a bit of perspective. All the cars in the background are pre-1915. The front fenders hanging on the wall to the viewer's left appear to be early 1913s. They have the bead across the middle to reduce vibration, which was added for the 1913. They also appear to lack the inner skirt beads added shortly after during 1913 production. The rear fender hanging farther down that same wall appears to not have an inner skirt. I am not sure what year that would indicate, but I "think" that may be 1912 or '11 rear fender? The rear end housings appear to be the late '12 to early '15 twelve rivet style.
I would guess that photo to be from '13 or '14. Some timeline for the early "Ford in an oval.

As a silly aside? When was the last time you saw an engine block sitting on top of a radiator?
2 comments • Page 1 of 1