Looking for opinions/input of those who have tried/experienced High compression pistons.

These are some comments from the old forum of some who have HC pistons.

I like using H-C pistons and milling the head if I'm building an engine anyway. If your engine is staying in the car, it's easier to change the head. Either way will get you higher compression and a more powerful engine. The high-comp piston/milled head route is less money than a new high-comp head (about half as much), and you still have a stock-looking engine with a cast iron head.

I put HC pistons in the engine on a 1914 Touring we tour heavily. It runs nice and sounds good. They have been in the car since about 1998. No problems what so ever.

I agree with Mike. I put the HC head on my car that already had a good engine, but installed HC pistons and stock heads on the engines I've either had to re-ring or rebuild.

I've ran the Hc Pistons with a low head. It had tremendous low and mid range torque not much top end though

Domed pistons raised my compression ratio from 50 to 75 psi. The engine was rebuilt at the same time and some of the raise was from a shaved head and block top.

The difference in top speed was more pronounced. It went from 40 to 70 mph and the T was never opened up full, due to stopping again or likely rolling over from the quick steering or a blowout.

l am using the domed HC PISTONS with a little head modification and cam mod, with the bigger breathing inlet manifold, in my wife's 26 Tudor, with very favorable results, The results are not as different as you are lead to believe.

If you want to retain that original look from the out side, this is the way to go, if you dont care, either or.

I have one car with, high domed pistons, Chevrolet valves and a Chaffin reground cam. This was done way before the heads and cams we now have were available.

The engine is installed in a 25 Coupe which runs along decently, but comparing it to other engines I have with aluminum head and either a Stipe or Chaffin cam along with a couple other things, it defiantly takes a back seat.

I routinely shave 0.100 inches off the original head and install domed pistons on rebuilds. This system works fine as far as fit and clearances go. I have a side-by-side comparrison of this configuration with a 280 high lift cam and a stock cam and the high lift outperforms significantly!

In my 4 Model T's, I have one with the high domed pistons, 1 with a Z head, and 1 with a Chaffin (Reeder) high compression head.

In my experience the Z head is the best as it gives more power than the others. Further, I would not use the domed pistons again as the low rpm power from them is lacking.

Just my opinion and experience, others may vary....

"Most people" might be unhappy with domed pistons, but I'm not. I built a "new" engine for my '15 Touring just before the Richmond trip last July. I wanted it to appear stock on the outside, so I used an original Ford low head milled 1/8" with domed pistons. The previous engine has flat-top pistons and a Reeder 6:1 aluminum head. All other components were the same: Stipe 250 cam, Anderson timer with Ford coils, Simmons straight-through carb on an early aluminum manifold, etc. I have put 3,500 miles on the new engine since last July. There is one long hill I drive up from time to time, and I can now go up and over it without downshifting. I could not before, so apparently the new engine has more torque than the previous one. I have heard several folks bad-mouth domed pistons, but I am quite happy with them.

I'm a avid fan of domed H/C pistons, sorry, l love em and will continue to do so, l have had a Z head, passed it on. The difference is not chalk and cheese.

I have used high-compression heads as well as high-compression pistons with milled stock heads. Both routes will give you noticably more power and torque, and I really can't tell any difference in performance between the two.

If you're rebuilding an engine, the pop-up pistons and milled stock head are a bunch less money than a Z head. If you're not rebuilding the engine and want a bolt-on bump in power, the high-comp head is easy to accomplish.

I've used domed pistons with a high head and the engine runs very nice. I've had no problems in 15+ years of use. I like 'em!

We use them on a regular basis during rebuilds. 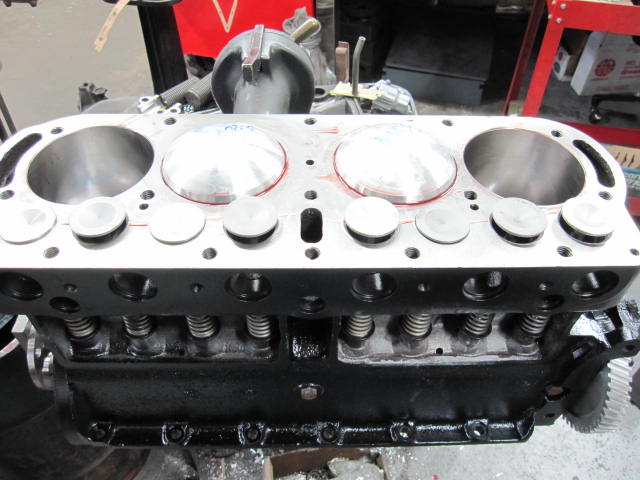 I like the HC pistons. Like others have said, looks original. I installed the HC pistons in Dads 26 engine, the only other power mod was to advance the cam. Runs great and has good power.
24-28 TA race car, 26 Canadian touring, 25 Roadster pickup, 14 Roadster, and 11AB Maxwell runabout
Keep it simple and keep a good junk pile if you want to invent something

I had HC pistons in one of my cars. On tour I broke a low speed drum in my transmission. A friend of mine let me drive an extra car he brought to the tour. His car had a Z head. His car had a noticeable difference in power over mine. I had never been satisfied with the performance of my car with the HC pistons. While I had my engine out fixing the transmission I changed out my pistons with new flat head aluminum pistons and elected to add a P head. I could tell a very noticeable difference. Here in Tennessee we climb a lot of hills. I am very pleased with the setup I have now.
Richard Williams, Humboldt, TN
President, Tennessee T's inc.
Top

kerry wrote: ↑
Sat Feb 02, 2019 2:15 am
Seems like you have answered your own question with those posts of the testaments of others

But its always good to get more opinions.
Top

Thanks John and Ricky.

I would like to be able to climb most hills in high gear, but would prefer the original cast iron head. If the HC head adds a huge improvement in torque over pop up pistons I would go that rout tho.
Top

Cast Iron heads were available for a short while a few years back for a little more $$ over aluminum. It would be nice if they were put back in production.
Top

I have in the resent past installed the pop up pistons in two engines. They go in with no issues and do make a big difference in power band, torque and top speed. The only thing I check prior to bolting the head on, is to check the clearance between top of piston and head. In case the head or block had be milled.
Top

BuckTspecial wrote: ↑
Mon Feb 04, 2019 8:31 pm
I have in the resent past installed the pop up pistons in two engines. They go in with no issues and do make a big difference in power band, torque and top speed.

Tyrone, Have you also used the HC head? If so how do you rate the power increase of the HC pistons to that of HC head?
Top

Larry - Like you, I don't like the idea of an aluminum head on an iron block either. I know, I know,.....they seem to be very successful, but I just can't help thinking that there just HAS to be two different expansion rates, and I just don't like that idea.

As an "aside" Larry, from what I've read in the past, the claimed 6-1 compression on that head isn't really 6 to 1, it's actually something less. That makes me wonder if the "CLAIMED" 8-1 compression ration is "ALSO" something less than 8 to 1, so maybe that 8-1 head would actually be closer to the 6 to 1 (....or maybe just "SLIGHTLY" more) that we'd like. Maybe somebody that has actually done some research on this and has some "factual" information in this regard would chime in here:

In the meantime, I like the high comp pistons too,....FWIW,....harold
Top

Oh,...just one more thing,.....a few years ago, I had "Steve's T Works" rebuild the engine in my '27 depot hack. At that time, we noted that the high-comp pistons were almost the same price as the standard pistons, which was one more reason to go with the domed, high compression pistons. And I did notice a significant increase in power. I think that noticing the power increase is "noteworthy", as this was not a worn-out engine that I had Steve rebuild, but rather a strong-running engine that had seized-up due to sudden (and unknown at the time) loss of oil! In other words, when I say I "noticed" an increase in power with the domed high-comp pistons, this was compared to a strong running engine,....meaning that my notice of additional power was not due to comparing the rebuilt engine to a worn out one, but actually due to the high-comp pistons. OK,...enough,...FWIW....harold
Top

Do high compression pistons work under a Rajo C-35 head? I've got a head and sometime soon plan to have an engine built around it with probably a stock SCAT crank. I'm not sure if I want to go with the stroker crank and new rods, mains, etc. This will go in a 26 coupe to hopefully cruise with the local classic car club.
Top