I was thinking, we often post pix of our latest iron...anyone want to (or dare to) share a picture of their first "Look what I brought Home?"

Add the year you got it too.....maybe a little story too?

It only went for a mile at a time, I scraped all of that yellow off with a broken glass bottle. Still own although after 20 years of fun then disassembled now with parts stored all over the county.

My first T was a 1926 RP project I bought almost thirty years ago.

I can't show the whole thing in one picture because it's scattered around the barn in pieces until I get to it.

This is Rich Bingham and I in 1964 with my first T on the trailer. I traded Rich the Runabout body for a Touring body. The same chassis is now under my Tudor. The photos were snatched from 16mm film my Father took. That would be 55 years ago. It is a 1925 T.
Rich

When did I do that?
Top

I cannot find my pics of what it looked like before, but just imagine the worst car you could possibly get, like the ones on Model T Haven's website (but worse)

It took 13 years to get this car to look this way. 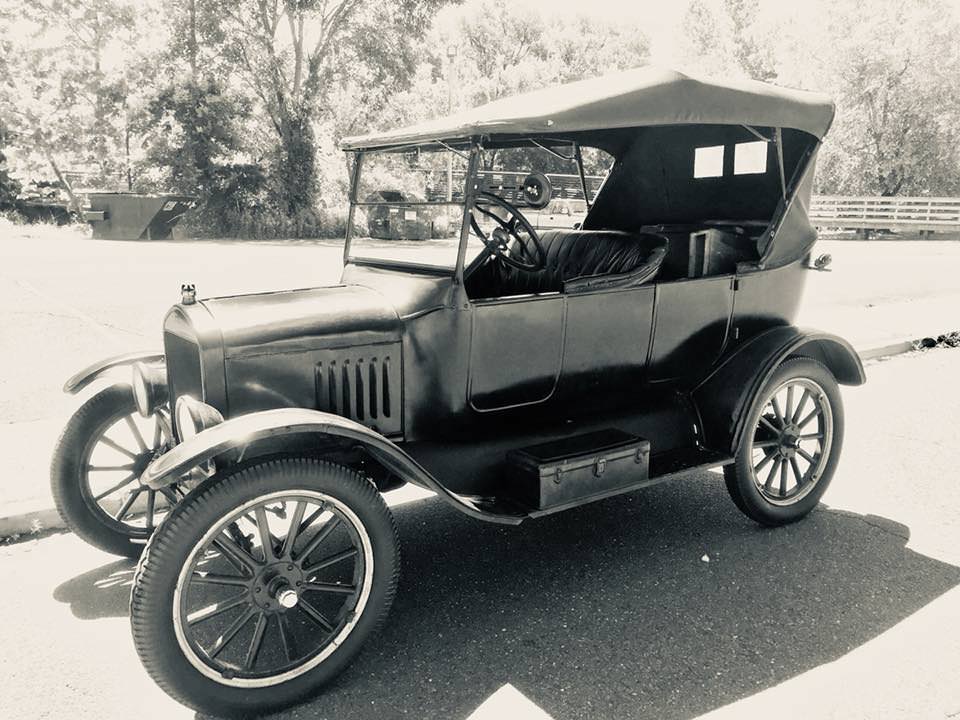 What a fun question !

As a kid, I hoarded PARTS of Model T's, but Dad hauled off any old cars we dragged
home to the farm. A handful of parts stayed with me all these years, in particular, a
pair of deep amethyst headlight lenses that I swore someday would get installed in the
TT flatbed I planned to buy for 45 years. It took a chopper crash in AFG to shake me
out of "never getting around to it" and finally hunting down that truck and installing the
purple lenses. So, even though I have been a TT truck fan for a very long time, my actual
ownership of a working, operating example has only been since I came home in 2013.

More people are doing it today than ever before !
Top

Here you go. This is Buddy, he's my first T and my first car.

My late father, Steve Rini, started working on cars when he was 6, and he practically lived in the garage. When I was about 12, Dad's car books got "interesting," and I found myself liking 1920s touring cars. (I should give him credit, he say, "Why do you want a 1920s car?" but, "Well, lets find out more about them so we get a good one.") Within a couple years, we'd joined the Long Beach Model T Club and looked at a few cars. None was right. Then I found a newspaper ad, but at 14 I was too shy to cold call the seller. A father/son argument ensued, and I went to my room. Ten minutes later I heard my Mom yell, "Chris, get dressed! Your Dad called on the car, and it sounds good. We're going as soon as you come downstairs." Three hours later I bought my first car. My life savings was obliterated, but I regret nothing!

I found mine in Wisconsin on a rock pile in 1945. I still have it, restored close to origional

Nice Fords! 'cept for you Steve. Like to see more of that tough little bugger.

Looks like this '19 engine...
My first big bit was said '19 $25 "unit power plant" to slam into a frame.
Honda Distributer running backwards to give him some fire then.
And last, a pic of him spewing smoke and rings out back, down The Hill at swamp level last year. He ain't changed and may never.
Humble

Since I lost my mind mind, I feel more liberated
Top

This is what my Model T looked like when I trekked upstate to the seller's home for the pre-purchase inspection. As you can see, the car was in pieces. That was because it was in the process of being gone through from nose to tail. She didn't look like much then, but I really liked the seller who took the time to teach me how to drive one of his other Flivvers. He did a great job of preparing the car and, on top of that, trailered it to my home for the price of gas and tolls. A true gentleman. Best deal I ever made.

We found our '21 Touring in a motel parking lot in Pigeon Forge TN way back in September 2016. I drove it for the first time the day before the 1st anniversary of bringing it home, or actually getting it delivered home. Most of the expensive work had already been done, engine & trans rebuilt, interior bought & partially installed, new tires, three new fenders, new splash aprons, new top kit, but no bows/sockets (which we found and bought on here). I put the thrust washers in the rear axle, because somebody had replaced only the RH side. I bought and installed new rear shoes and shimmed the rear wheels as needed. There was no hood included, but I bought a so-so used one and will probably buy a new one from Lang's later.
The previous owner had owned the car since the late 60s. Our car has electric start, generator and battery but has kerosene cowl lamps and taillight. I added a period correct(?) brake light. If we had already owned the car we could not have rebuilt the engine, bought the top, tires, fenders, and other parts that were included for the price we gave for the car.
We would have been able to ride in ours somewhat sooner but the day (July 18,2017) that I planned to finish up a couple of small things and drive it for the first time another driver crossed the center line and hit me head-on when I was on my way home. I was critical for about 48 hours then spent several weeks in two different hospitals. Even after I got home I was unable to work on the car for several more weeks. I now, and probably always will, walk with a cane. But I can drive the T. Doing pretty good considering the doctors told us after my surgeries to be prepared that I might not be able to walk again. That was in a Higher Power's control.

Rock on Tommy! Higher Power? Gosh, I guess! And YOUR own power or stubborn nature

dear sir!
Bob Coiro, that pic was just too cool! And you still bought it and enjoy the heck out of that car.
What blessings these darned old T bring us.
Since I lost my mind mind, I feel more liberated
Top

Here's mine - my first and only.

Today I ran across a picture of Richard Bingham's first model T. It has the Runabout body I traded him when I bought my T. He had gotten proficient in changing the old tires we were able to find back then.

When did I do that?
Top

Here's my first model T...a '20 runabout....followed me home on my friends open trailer I believe March 2012. Drove it right off the front of his trailer! At that point being such a newbie I still hadn't retained that when you PUSH the clutch the car KEEPS moving!! Amazing how quick things happen on a 16 foot trailer! The car wasn't hurt but my ego sure was. Sold the car last year. It was a great little car.